It’s been just over four years since I kicked off Stop Ironing Shirts.  I never expected to have tens of thousands of people read my intermittent articles about early retirement.

I originally started this to share all my thoughts about the last few years of working and then what it’s like to be in my late 30s and not having to go into work anymore.  We had just survived a medical scare that after four years of wavering,  convinced me that early retirement was the way.   Fortunately I’ve been living in a coastal city for two and a half years, declaring early retirement just before turning 37 and escaping the concrete jungle devoid of most outdoor activities.

Many of my readers have been around from the beginning, while others have found Stop Ironing Shirts recently.   If you’re hoping for financial advice, this article is not for you.   If you’re curious about the website and it’s history, please stick around and keep reading.

Why the 4% Rule Will Always Work

Reader Question:  Should I Coast FI?

Landshark Case Studies: Can the Landshark Family Retire and Landshark Revisited: When is Enough Enough?

When Did the Site Get Traction?

It took about fifteen months for the blog to get to a consistent readership of 7,500 pageviews per month.   Early on, the site would barely have any pageviews then an event would drive a bunch of readers to a single article.   These included being featured in Physician on FIRE’s Sunday’s Best, ChooseFI’s newsletter, and the now defunct Rockstar Finance.  Two early interviews I did also drove readership, Millionaire Interview 35 by ESI Money and Early Retirement Now’s Case Study.

Slowly these events added email subscribers and twitter followers, which means every time I posted a new article, these subscribers and followers get notified and regulars show up to read what I’ve written.   Slowly a few articles started performing with search engines, increasing the number of unique visitors that find the site.   In 2019, my controversial post around home ownership received a lot of discussion and drove the most page views for the year, including a debate on the Stacking Benjamins show.  In 2020, my 2019 article about The First $500,000 went viral and generated a record number of site visits in the first quarter.  2021 hasn’t seen an article with outsized performance, but the site’s page views are still consistent thanks to the slow upward trend of social media followers and email subscribers that are notified each time a post is published. 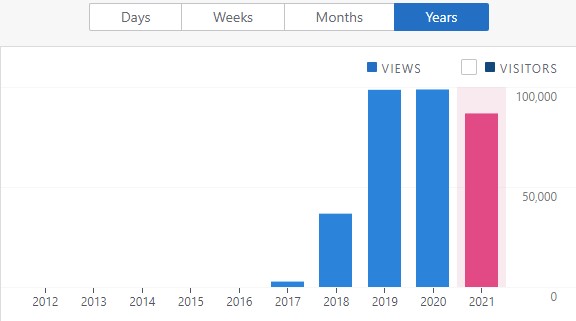 2021 is on pace to be consistent with 2019 and 2020.   Search Engine has been the biggest disappointment as inbound traffic peaked in December of 2020 and then trended downward for the last nine months.  I don’t spend a lot of time studying this and I’m assuming some of the decline is warranted.  For example,  I used to rank #1 for CoastFI thanks to the early 2019 article, but as this term has become popular I’m currently a page four google result.   Interestingly, my posts about using Facebook Marketplace and deciding when to repair or replace an old vehicle still generate some search engine traffic.

The other thing that helped the site both immediately and occasionally drive new visitors are podcast interviews.   I’ve done three interviews since retiring and twice joined the panel on the Earn and Invest Podcast.

The FIRE Drill Podcast interview was right when I was retiring then the FI Show occurred ten months after I retired and was in the middle of the pandemic crash.

Does the site cover it’s cost?

Historically no.  In 2021 and going forward?  It should.  Two years into the site, I added display ads with a partner.   These generated around $120/year while I also picked up an extra $20 or so a year in Amazon affiliates.   The site costs have averaged $200/year between hosting and domain registration.

Recently I converted to a new advertising partner which is on pace to generate $600 – $800 per year.  If the site looks a little rough, I’m still trying to get all the placements right and is a work in progress.  Fortunately the change means the site will break even this year and be profitable for its lifetime sometime in 2022.

What Does the Future Hold?

I’m mostly terrible at self promotion for the site.   Spending nearly two decades in sales mostly exhausted my desire to self promote or sell anything.  Maybe I will get better at self promotion, but absent a post going viral, the site may sit at it’s plateau or hopefully grow slowly.

Stop Ironing Shirts primarily exists because I enjoy writing and talking about financial independence and investing and providing useful information free of charge.  The satisfaction from writing comes from reader feedback: One person emailing me how my post about pension valuations and lump sum offers saved her over $100,000 by waiting from 2019 to 2020 for an offer will keep me writing for years.  As long as I can keep putting value out there in the world for my dozens of readers, I’ll continue writing.