We have been tracking our net worth monthly since October of 2012 and annually since the end of 2010.   It has been an outstanding exercise to track your progress and I highly recommend everyone track their net worth annually, quarterly, or monthly.  In recent posts, we shared our year-by-year financial picture and how we achieved millionaire status by 33. 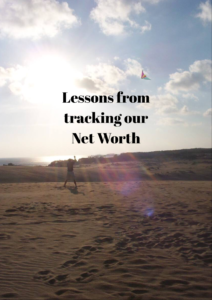 Lesson 1:  Debt can be good.   If you have years to work, don’t  focus entirely on paying off debt, especially economically productive debt like a home mortgage or student loans.   Our net worth benefited from contributing to retirement accounts while Mrs. Shirts was still in school and focusing on getting our investment accounts over loans.

We also misused and then reused mortgage debt on our primary residence.  We aggressively paid down home #2 by around $90,000 more than scheduled scheduled between 2008 and 2013.  Had that money been invested, we would have been at least $50,000 further ahead.   We partially reversed that in early 2014 by selling house #2 and only putting the required 20% down on the replacement home.   The market has returned more than 60% during the four years since we made that move.

Lesson #2:  Save $100,000 outside of retirement accounts.   The most significant/freeing milestone in hindsight was saving $100,000 outside of regular retirement accounts, which happened in 2013.   That savings equaled our financial freedom and flexibility.   We could loose one income and have a LONG runway.  We could loose both incomes and probably not have to work for two or more years.   The pressures of unexpected expenses went down!   Something came up?  Just transfer the money.  There was no longer any thought of car fund, emergency fund, travel fund, just spend less than you make most months, transfer the difference, and if you occasionally went over, you have a pile of money to pull from.   It was probably not coincidence that we had the courage to take on major life changes once we hit this milestone.   As a reminder, if you can live off of one salary, an emergency fund is not a great idea.

Lesson #3:  Part 1:  Just start!  The sacrifices made early payoff for the rest of your life.  We did a lot of things frugally in our first ten years to get to a net worth of $700,000.   That money left alone and working would have made us millionaires by 36 without any additional contributions.  This was really the Financial Independence number, we just didn’t know it at the time.   Get to $600,000+, have at least $100,000 of that liquid like we had right before turning 33, then we could have scaled back to earn just enough to cover living expenses.    Our salaries were underwhelming for the first seven years of each of our career, but the power of being frugal and just starting those investment accounts has been huge for us.

Lesson #4: The Wealth Snowball is real.  We saw the wealth snowball take full effect in 2013.   The Shirts household had a net worth of $469,000 and $473,000 in investment accounts at the end of 2012.  (our home equity was offset by outstanding student loans).  The stock market decided to right its years of treating us wrong and the S&P returned 32%, the highest ever of our working careers.  Our $470,000 invested grew by over $140,000 plus we socked away some additional cash since this was the year we found Mr. Money Mustache.  This was the tipping point where we realized financial independence is within reach and the nine plus years of grinding away would payoff.

Lesson #5:  Becoming a Millionaire was anti-climatic (and could happen more than once).   Its easy to go through life and have the attitude of “I’ll be happy when ____.”   I had that opinion for a while about money.  Growing up while watching and experiencing financial stress had ingrained this into my mind.    I’ll be happy when I become a millionaire.    It isn’t that simple!   I was the same person with the same job, I just now saw an extra digit in my net worth.   We happened to hit millionaire status in the latter half of 2015, which coincided with a 10% drop that occurred between August 2015 and February of 2016, so we often dropped out of and re-obtained millionaire status.  Take it from someone who became a millionaire multiple times, it isn’t the end-all be-all.  We even declined to purchase the bottle of Dom Perignon sitting at Costco we always talked about doing when millionaire status arrived.

Lesson #6:  Stay invested!   Our investing life essentially started in 2004.  We’ve experienced three years with greater than 20% returns, one year with a negative 37% return, then six years with returns in the teens, and four mediocre years returning 5.5% or less (and 2018 appears to be on track for the 5th mediocre year).   The media’s job is to grab attention for its advertisers.  That’s how they get paid.  Stores about how “This time is different” and how the “Stock market plunges 3% in one day!” can grab headlines and drive traffic, but the ten years of fairly boring positive returns between 1% and 16% happen silently without the noise of “Breaking news!”.  The market temporarily fell 10% this past February and I remember my iPhone buzzing with the same intensity as an Amber Alert for a missing child over a one day drop in the market.  Ignore the noise and stay the course, you will win if you play the long game.