I’ve now passed eighteen months since I left my corporate job and moved halfway across the country to start the next chapter in our life. What has it been like over those past eighteen months?

Related: Reflections on The First Year of Early Retirement

The biggest change since the last time I wrote a reflection post is fully accepting this is my everyday life. The old version of me (or my weekday) seems so foreign to me: Alarm clocks, pressure to be at a certain location by a certain time, or answering to bosses. I wake up every day and have near full control of my time.

I no longer think about “the dread of work” around 3pm on Sunday.  Sunday is just another day, with slightly more crowds out and no Chick-fil-A.  Sunday means we passed five people on the trail instead of one or needed to switch up where we fish or park for the beach.

The highest form of wealth is the ability to wake up every morning and say “I can do whatever I want today!” – Morgan Housel.

Here are a number of things I’ve been thinking about:

The Balance of Leisure and Productivity

One statement I’ve been thinking about is “removing things that generate unhappiness doesn’t equal happiness”. Well, that’s not exactly true: In the short term, removing work generated quite a bit of happiness. Long term, there still needs to be things that fill some pieces of what a career gives us as humans. An introspective question I’ve examined over the past six months is what is my proper balance between being productive and leisure (i.e. lazy!)?  I think everyone is wired slightly different in this regard.

After the first six months (where I earned absolutely nothing), I’ve been some level of traditionally productive.  In the last twelve months, the combination of my consulting work and our joint Instacart shopping has averaged just under $2,800/mo. I don’t know if this will continue and I don’t have much visibility into the next dollar, but so far this has exceeded my expectations. The early retirement police may come after me, but I’m happy with the balance I’ve found so far. That $2,800/mo does not include another $200/mo or so I’ve averaged by churning bank account bonuses.

Regardless of whether I qualify as an early retiree or not, I can say I’m convinced Financial Independence is for everyone.

Where Does That Productivity Go?

I recently finished Half Time by Bob Buford and went through his Four Square Test. This plus some time with Alan Donegan earlier this year helped narrow down what I’ll do for productive work.

I’m sticking to narrowly defined consulting, primarily providing deal evaluation services to companies and limited partners. Accredited investors have the opportunity to invest in private companies and syndicated real estate, but may not have the experience to evaluate the risk of every type of company or real estate property they see. I can provide an hourly consultation and use my experience of evaluating 2,000+ real estate and small to midsize business transactions and provide value to people. What are the risks? What is the range of projected returns? What could go right and what could go wrong? Are the sponsor’s projections reasonable? Are there other industry risks that are being overlooked? I enjoy looking at deals.

Shameless self promotion time:  Feel free to reach out if I can ever help you!

I took a long day trip with my wife and in-laws who were visiting recently. It was a random Thursday in October and it left me with many observations about my retirement/life:

I’m forever thankful to “retire” when I did: We were young enough to establish our own (and new) habits/routines/hobbies. I feel bad for those who retire at 65 and the only recreation they know is eating out and retail shopping because that was how they were trained to placate their stressful workday for forty years. 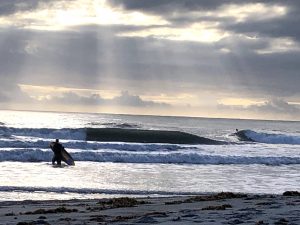 Here’s to mastering some of the current hobbies and continuing to try new ones!

I No Longer Always Feel Tired

It took a solid year into early retirement before I was consistently sleeping well and not feeling tired. Sixteen years of stress took its toll and my body and mind took some time to deprogram. I’m now consistently sleeping 7.5 to 8.5 hours per night and waking up without an alarm clock. I’ve also become better in tune to understanding what creates good sleep for me: No caffeine after 3pm, no food/sugar after 7pm, and getting to sleep by 10pm.

^ This took a year for me. Slept a glorious 8.5 hours last night

I expected early retirement to be like vacation in this regard, sleep well for a few nights and no longer be tired. It just took more time than that.

I’m going to venture a little into discussing what in the world the last six months have been like and what the next six to twelve months might be like…in the context of this lovely virus we’re all dealing with.

As you can probably guess from the Instacart posts, we’ve not been in the camp of fully isolating at home. Fortunately we are relatively healthy and under 40, which puts our fatality risk fairly low if we were to contract this. Per the CDC, as of October 28th, 4,262 people have died while infected with the virus out of a population of 41,659,144 people between ages 35 and 44.   That’s not an insignificant number but it only accounts for around 1 in 10,000 people in our age group.

It isn’t exactly a high risk, but I’d prefer not to get sick with a respiratory illness, unknowingly spread it around, or deal with lingering side effects. For this reason, we have rarely eaten indoors at restaurants, not gone to any bars/large gatherings, and have only stayed in one hotel since February. The family is likely cancelling their annual Thanksgiving/Christmas gatherings for my extended family since many are 55+.

So what do we and don’t we do over the next six to twelve months before this is gone?  Do we still make an extended winter trip to somewhere warm? I have concerns about being in a foreign country in the Caribbean if the pandemic accelerates and be at the whims of a foreign government’s  actions.   Will we go to Hawaii this winter? I’d rather be in the US, but Hawaii’s pre-testing program and fourteen plus hours of travel with a mask adds a bunch of friction to the process. The state has also taken some draconian measures such as writing $5,000 tickets for sitting alone on a beach at one point this year. It would be a bit of money and commitment to travel somewhere only to have strict lockdowns be put in place.  My tolerance for that friction may change as it gets colder here..

The bigger question I have in this risk management decision is how much of our finite life (1.5% to 2%?) are we willing to give up for something that’s relatively low risk to us? How much additional friction are we willing to put up with for activities we enjoy?  My guess is we aren’t the only people having that debate. We’re probably waiting a few weeks to see what happens with the latest spike before scheduling anything, but am leaning towards traveling for the winter.

So What Would I Have Done Differently?

This question comes up a lot and I’ve thought about it for a while when coming up with advice for other future early retirees. Here’s a few thoughts:

I am not sure I would have pushed for the last two promotions that I received. I don’t think I had the experience or self confidence at the time to fully evaluate the exchange of time vs. money and the overall cost of incremental work. In my profession, management only made 10-25% more than individual producers in exchange for a lot more of my time. There were some incremental benefits 3-5 years out with restricted stock, but I only participated in this for one year before retiring early.  My ego is happy I “proved to myself” I could do the job, but I didn’t need to take those promotions. I had already achieved and investment earnings were going to run their course. My job in 2013 was not difficult and I could have replicated it at 10+ employers in the same area based on my sales history and clients I managed.

I should have valued where I lived more: Life’s too short to live somewhere you don’t like. I never had an opportunity for remote work, but this applies to those who do. I feel like I was five years too late moving to an area that was warmer and near a beach/good fishing. Moving here sooner would have given us the ability to settle in with housing and friends. Getting a mortgage without an income is challenging after 2007 and there’s a possibility I have one more move in my future, one that might even require me getting a remote job briefly to solve the housing puzzle.

Those are consistent messages I’ll talk about when people ask for advice on early retirement. I like helping others consider all of their options.

Swiping the line from the Earn & Invest Podcast’s previous name, I’ll take a shot at answering the questions of What’s Up Next?

– I’d like to have geography and some sense of housing nailed down in the next eighteen months, but getting to that is going to require some outside help with the risk and friction of travel going down. Moving is a pain, costly, and we’ve been hurt repeatedly by home ownership, but indecision itself is a decision. I think I’m balancing this against my aversion to financial risks and am not quite comfortable yet in parting with the money when our current situation is pretty enjoyable and low risk.

– I’m enjoying the dabbling in consulting I’m doing and hope to pick up a few more assignments. Having the clarity of a year and a half away from a taxing career finally gave me the time to evaluate what I enjoy. I’ll continue to reach out to people I know and let them know I’m available to take on projects and decide on any other marketing activities.

– I have been thinking about what to do with/where to take this blog. I’ve made the transition to Financial Independence and Early Retirement just being my normal life. There are less topics to write about now that I’m not obsessively planning my exit from corporate life or griping about the challenges of the job. Is my story now as relatable as it was when I was getting out? I don’t want to just shut it down, but am also not sure how much there is left for me to write.

Until next time, enjoy the journey and may your charts be up and to the right.

Want to get notified every time a new post is written? Please subscribe on the right hand side page and don’t miss the most recent post. Have additional thoughts?  Please leave a comment below!