Today is the fourth installment in a round of posts in the midst of turning in my notice.  For further reading, here are the first three installments:

Part 2:  Opening Doors for Others

Part 3:  What about a Sabbatical?

Early Retirement/Quitting:  At this point, who knows this is coming?

I’ve let a couple of people in on my plans. The list doesn’t make it very far past one hand and I’ve been very cautious with anyone who could have exposure to my current leadership.   One of the people who knows is a former boss and mentor of mine who was pressing me to consider other opportunities.   He retired at 52 and has been kicking the tires on a second career, but has been referring the recruiters who were after him over to me.  Thus lead me to disclosing my plan and seeking advice.

This former boss was good to me and we’ve stayed in touch since I stopped working for him in 2012.  A couple of years ago he was passed up for the “next level” promotion inside the company for the 6th time.  This is the corporate peak for “It’s not you bro”.  He was already financially independent and his spouse worked in a job she enjoyed.  He received the disappointing job news in August, but had to stick around until the first of March based on how bonus and restricted stock happens at our company.

I asked him for some advice a few months back, specifically:  “How did you make it through the last six months, knowing that you were done?”  He told me how tough it was the toughest thing he had ever done and gave a thorough response.  He wrapped up the response by saying, “I think it would be like taking a cheese grater against my balls”.  He always had a flair for the dramatic*…but this as a strong analogy, even for him.

He specifically told me he regretted not taking a long vacation when the time got close.  January and February are tough months in our business, its a new year with all the usual unrealistic expectations pushed down from above.   You know, we’ll grow X percent this year, even though we only grew 1/3rd that much last year and we haven’t really changed a damn thing causing the growth to be slow.

Tenured employees get four weeks of vacation a year and accrue the days weekly.  If you you don’t take any vacation, you get paid extra upon departure.  If you take too much vacation, the company takes it out of your final paycheck.  I was planning on not taking any vacation, pocketing the extra money, then departing on my permanent vacation.  His advice went against that!   He actually recommended taking the entire four weeks up front and letting them net it out of the pay.   We didn’t quite do that, but settled on a nearly two week trip to Kauai. 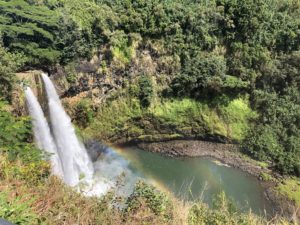 Wow…the advice was spot on.

One of the most challenging things to do leading up to early retirement is to protect your calendar.   Some people are fortunate to have a supportive culture that understands someone leaving corporate America.   Others do not.  I work in a culture that does not and avoiding future work commitments has been more challenging than I expected.

What do you do when your friend calls you about getting together at a corporate meeting six weeks from now?

I’m in a job that involves soliciting new potential clients for business – Do I really want to do that when I know I will see no benefit from it?

What about committing to that meeting in four weeks?  Lunch with another vendor that wants to pitch us something.

Taking a vacation in someplace with a four hour time difference and less than seller phone service when hiking delayed this!  Its easier to push something off when your email is on auto-respond.

Thinking through the decision:

It takes me three to four days to slow down and realize “I’m not working…”   What would it be like to be “on vacation” every day?  Vacation is always awesome in the beginning, but towards the end some realities start kicking in.  We like renting condos with kitchens, ect, so we can live closer to reality instead of just staying at an all-inclusive resort.  This may not be the same for everyone, but I can think with the clearest of minds when I’m removed from the daily grind & routine.

I came away with two clear and confirming thoughts:

Corporate America is just not for me.  It is too controlling, too political, and unwilling to change.  Some of this may be my specific employer, but my observation is this is an industry-wide issue.  I am paid well, but that pay comes with the exchange of my time and freedom.  Someone approves when I can/can’t take vacation.  Someone tells me where and when I have to be somewhere.   I bring up an issue and instead of someone saying “You’re right, we need to get better”, I’m told how much worse it used to be (as if that’s reassuring).  Every two weeks the cost of this freedom comes in a paycheck, but its a paycheck no longer required.

I enjoy productive work…but only at my discretion.  I found myself writing more.  I experienced entrepreneurial ideas racing around in my head.  I texted with friends that enjoy exchanging those kind of ideas then turned around and thought about what I could do for my board / committee positions in a couple of not for profits.  There have been clients who’ve approached me about working for them, which I wouldn’t do directly, but I would consider doing something under my own terms.

I enjoy work, but I do not enjoy a job.   A job commandeers my time for a paycheck.

There are things I can do that would provide value, value that would be rewarded with money.  Do I suddenly become an early retirement fraud?  No, financial independence is about optionality.   If I decide some of my hobbies involve business, then they will be rewarded with money.  That’s okay – The scorecard in business is money and winning involves making money.  Besides, there are some good things that could be done with extra money.  Take a look at the comments from this recent thread from Rich & Regular:

What would you do if you got ONE MILLION dollars tomorrow?

I’ve run my potential exit scenario through my head hundreds of times, but usually they involve fantasies like Peter Gibbons and the consultants or cleaning a fish on my desk:

Now I was within a month of this thing actually happening, thoughts about the real version of quitting have shown up.  What order am I going to let the news get out?  What exactly will my resignation letter say?  Am I prepared for everyone’s questions?  How will I handle animosity from some who’ve made different choices?   What people do I want to control the message to vs. who do I just not really care about how they hear?

Then there’s also external clients and not for profit commitments.  I won’t be the person at the company for them anymore.  We plan on moving and the non-profit commitments will need to be exited.  What in the world do I put up on LinkedIn where I keep up with a bunch of people? (hint: Private Portfolio Manager & Leisure Entrepreneur).

This is getting real and there’s I should have a process to this madness to help control the right message.  As easy at it would to say “I DGAF, the reality is I do.”.

Thinking through this has been valuable and the vacation was great advice.  It may not be ideal and it may be expensive in the confines of a work schedule, but figure out how to do it.  You will be happy you did (I know I was)

My better half…inspired by a recent commercial

*One of the awkward unknowns in my employer’s culture is how long someone works after providing a notice.  Some people are terminated immediately but paid through their notice date.   This former boss/friend suggested I say the following in my exit interview:  “Well, I thought about it and asked myself, would I rather come into work for you today, or would I rather eat a bowl of broken glass?  At the point I thought the broken glass looked better, I knew it was time to retire”.   As you might expect, he accomplished being asked to leave two days into his thirty days notice and being paid for the month.

One Reply to “Take a Long Vacation Before Early Retirement”