Should you convert some of your retirement funds to a Roth IRA?   Is it worth it to pay the tax now or waiting to pay taxes on these funds later?  What are all the considerations?

What are Roth IRA conversions?

Individuals are allowed to transfer money (convert) from a pre-tax IRA to a Roth IRA.   The amount converted is considered taxable income and the custodian of the IRA will send a 1099-R form at the end of the year.   The taxpayer then reports the amount of conversion on that year’s tax return.  The taxes can’t be withheld from the IRA without penalty, so the individual must have the funds available to pay the taxes outside of retirement accounts.

Roth IRA conversions became a foundational strategy for early retirement thanks to the Roth IRA Conversion Ladder.  This dispelled the belief that pre-tax / 401k funds can’t be accessed until age 59.5.  Once funds are converted from an IRA / 401k, those converted funds become available to be withdrawn in five years.

What are the conversion considerations?

This is the unknown factor in providing the exact answer on whether or not to convert IRAs.   If we knew for a fact tax rates would be higher or lower in the future, we could make the optimal decision.  In absence of that, we must make decisions based on future probabilities.  State tax rates should be taken into consideration as well, if you project moving to / from a state with income taxes, you can plan the timing of conversions.

There are low tax rates and other benefits to reporting low taxable income while there are higher rates and various penalties / surcharges when reporting high taxable income.   Prior to traditional retirement, early retirees can see lower income benefits such as tax credits towards the purchase of health insurance, child tax credits, and potential financial aid for college.   After traditional retirement, low income retirees can avoid taxability of social security payments and income based surcharges on Medicare.

In the various cases I’ve reviewed, children under the age of 18 swing the benefits in the taxpayers favor to be low income.   If the early retirees have no kids, the kids are above the age of 18, or there is some outside income already removing the healthcare tax credits, it would make sense to accelerate conversions.

How important is it to have access to Roth funds?  Once funds are converted, they are available in five years.    In our case, it’s likely we will have more money than we can use in 19 years, when we have full access to all retirement account earnings and a small pension.  If investments double every eight years, this means we’d have 2.5x the current balances.   In the medium term (next 5-10 years), access to funds is more valuable to us.

Pre-tax accounts are just that, pre-tax.   All contributors to pre-tax accounts eventually pay taxes on this money.    The 2017 tax changes now allow a couple to have income of $391,900 in 2023 before the marginal tax rate jumps from 24% to 32%.    Fritz Gilbert put together this chart in 2018 post outlining the changes and opportunities. 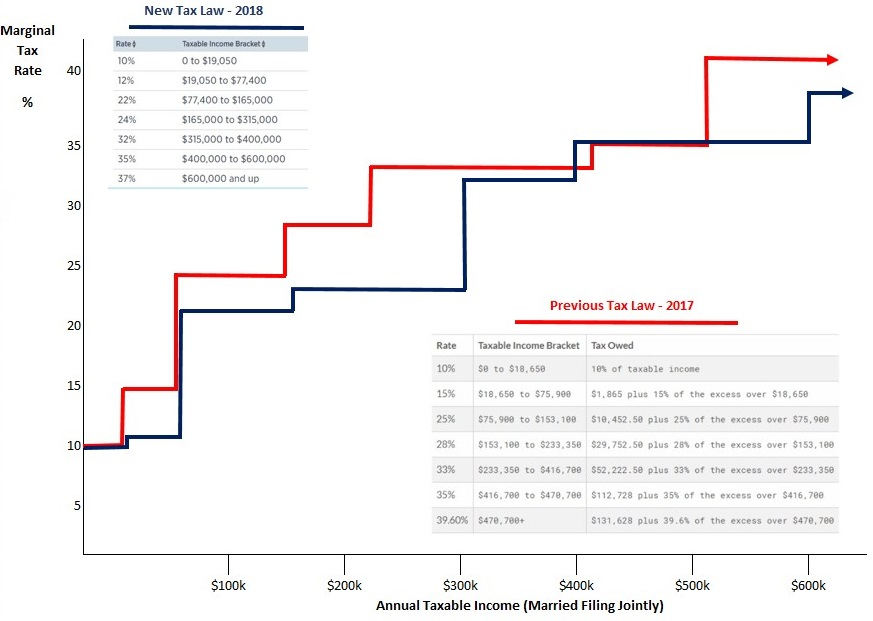 Projecting the lifetime tax liability:   The following chart outlines the base case, a conversion strategy on a $1,000,000 pre-tax IRA with an 8% annual return and a blended tax rate of 19%.

The lifetime taxes due on the account in this example came out to just under a quarter of a million dollars.  Suppose this same conversion was completed at $100,000 per year

The tax rate paid is lower but the lifetime taxes paid start climbing higher.   With regard to lifetime tax liability, there’s a sweet spot in the conversion strategy for most early retirees:   Don’t go so quick that it triggers tax rates higher than 24% federal, but don’t go so slow on the conversions that investment earnings outstrip any progress on lowering the pre-tax account balances.

For a $1,000,000 balance, four to ten years generally calculates as the ideal conversion timeline.

Other Strategies with Conversions

Converting the largest balances, potentially up to the end of the 24% tax rate, during the first part of early retirement to get the pre-tax balances lower, then slowing the pace or ceasing them all together.  Affordable Care Act premiums are tied to age but the tax credits aren’t, making the credits more valuable each year prior to becoming Medicare eligible.

Convert or increase the amount of the conversions when the stock market is down.   Unlike the choice of investing cash or changing investment allocations, this is a decision on when to pay taxes.    As long as you have the means to pay the taxes, it can be a nice benefit of a bear market since the average recovery is just over eighteen months.

Leaving a small residual balance could help take advantage of special situations or income management.   Congress will occasionally pass a rule allowing for special distributions from an IRA.   In 2020, Congress allowed a hardship withdrawal of up to $100,000 with taxes due over three years.   Almost anyone could qualify for the withdrawal based on the definitions of a qualified hardship during that year.  Congress also occasionally allows for up to $100,000 to be donated directly from an IRA for people of age for Required Minimum Distributions.   If charitable giving is in your estate planning, there’s a reasonable consideration for figuring out a small residual balance in the IRAs.

A small residual balance may be useful in managing income.  Some early retirees may be in a situation where they earn almost no money for a year and leaving some balance to be converted can take advantage of the 0% tax rate and / or help avoid Medicaid during the ACA selection period.

Ideally this residual balance would be enough to take advantage of the charitable exemptions while not so large it creates issues with Required Minimum Distributions.

Update: Shortly after this was posted, Michael Kitces published a summary of the Secure 2.0 Act that includes updated rules around disaster distributions and charitable giving from an IRA.

How Do You Decide?

Paying taxes now vs. paying taxes later will never be an easy decision.   We personally weighed all the variables and landed on a strategy to convert most of our Traditional / Rollover IRA balances over the next ten years.   Our conclusion was to front load the first year or two, then manage out the rest of the conversions with a small residual balance remaining after ten years.   I utilized a deferred compensation plan that generates taxable income for the next decade and eliminates most of the healthcare tax credit opportunities. The tax payments on the conversion are expensive, but we have multiple decades of retirement ahead of us and want to enjoy the tax free earnings and eliminate any high income taxes  / surcharges in our later years.  There’s not a perfect conversion strategy with the unknowns, but I hope sharing our thought process and analysis will help if you are considering conversions.

*Special thanks to Doug Nordman with The Military Guide and Fritz Gilbert of The Retirement Manifesto for their wisdom and guidance on this topic.

4 Replies to “The Sweet Spot for Roth IRA Conversions”