Some news in the Shirts household:  We bought a house.

After selling our last house in 2019 and enjoying the low stress lifestyle of renting for three years, we were thrust back into the housing market courtesy of our landlord’s money problems.   The timing on this low stress decision was unfortunate, the housing market decided to make a decade plus of gains, but we are happy we took our time to figure out exactly what we wanted.

Where did we buy?

After spending three years in the Charleston, SC area, we decided to head south and rent a furnished place on the central east coast of Florida.   A number of things appealed about this area, including better winter weather, a more reasonable housing market, better ACA insurance (national network!), and no state income taxes.   The housing market ran away in Charleston, specifically with the AirBNB impact on the beach islands, to where our dream of living near the water was not attainable there.   Commuting twenty minutes in traffic to almost anything was not our idea of enjoyment in retirement.   Instead we focused on an area with +/- $500,000 housing with almost all the inventory sitting above the coastal flood zone.   The no state income tax is an added benefit. We’re currently completing some larger Roth IRA conversions and not giving away an additional 6% to 7% to the state of South Carolina will be nice. 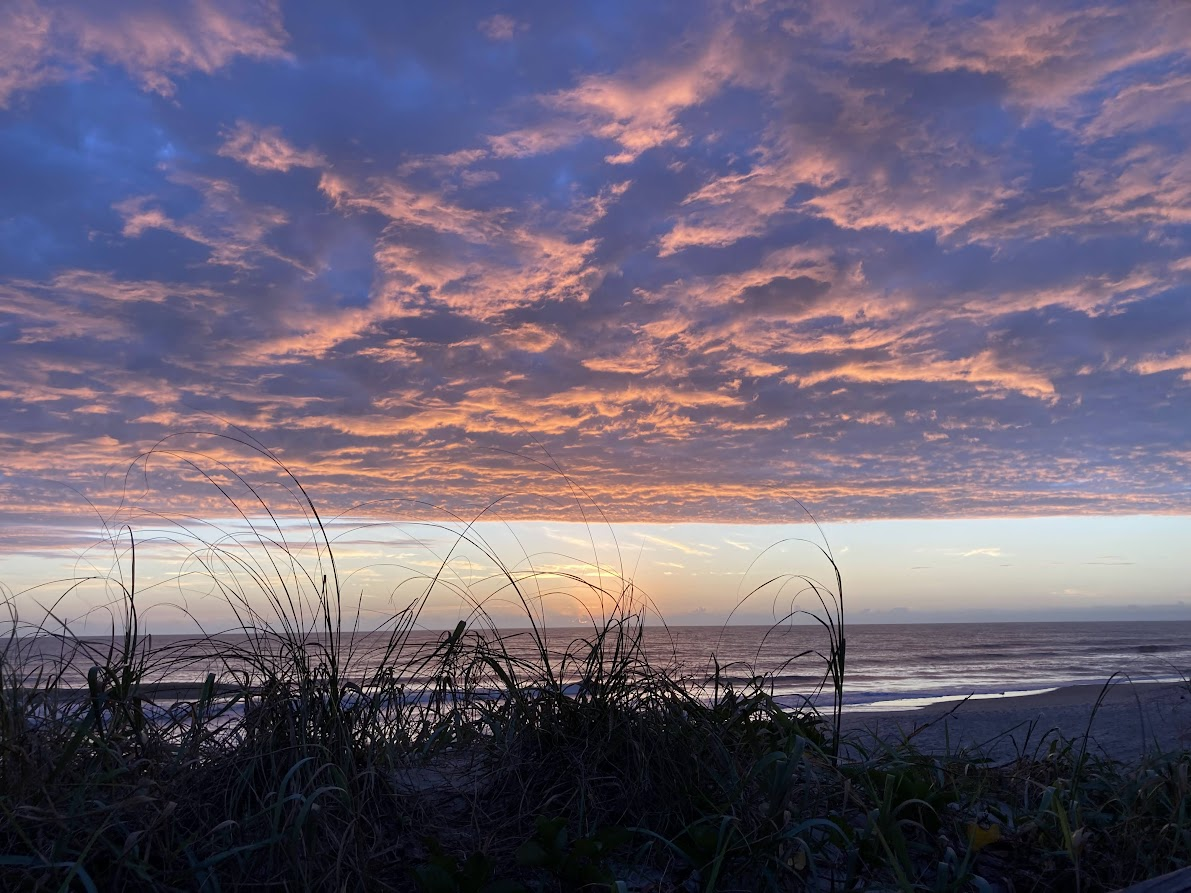 Not a bad morning view

The housing market peaked in this area of Florida in March / April of 2022, then started its slow process back to normal.  This process back to normal mostly meant the high quality houses at market prices still sold on opening weekend, but a good portion of the inventory with flaws in the property was still trying to get April of 2022 prices.   This started the slow and arduous process of making plenty of offers at 90% of asking price, then to be told “oh no, we’ll never take an offer that low”, and the house sitting around for 45-60 days before the seller and their real estate accepted reality and accepted an offer in that range.

We were open to many options:  Townhouses, single family homes, renovation projects, and/or duplexes.  There were pros and cons to all the options and inventory was thin, so we were open and flexible.   One unexpected challenge was unserious sellers, landlords who owned a rental house or duplex would put it up for sale, ignore / reject a reasonable offer made, then just let the house sit for 60-90 days before pulling it off the market.   This caused thirty active listings in our target area to be more like ten to fifteen at any given point.  We figured out Florida has property tax rules that are similar to Prop 13 and people who’ve owned their houses for 20+ years have minimal carrying costs.

We got one house under contract after seven different offers.  This would have been a renovation project, but the seller rejected the concessions we found in inspection.  Unfortunately, without those concessions, our renovation budget + purchase price would have been way above the comparables and we had to part ways.   (That seller pulled the house off market, did the repairs themselves, and relisted the house only to have it continue to sit).   Around the time that happened, the “non-QM” mortgage market imploded.  Non-QM loans are known as non-conforming loans, or mortgages that aren’t written to Fannie Mae / Freddie Mac standards.   Since we’re early retirees, we could only get $150,000 – $250,000 in a loan under the qualifying mortgage rules, but we were approved for up to $500,000 in a non-QM loan based on our net worth / total assets.   When we got the renovation project under contract, the lender came back to us and said the non-QM loan was now going to be at a 8.875% rate and a 1% up front fee.   That wasn’t going to work for us.

What did we end up buying?

We landed on a deeded half duplex located 150 yds from the ocean.   We sacrificed one bedroom and bought a 2/2 in order to get a 1980s build that was mostly renovated with an A+ location.   This size property with an attached two car garage, screened in porch, and a lighted crosswalk to the beach was a rare find.   We ended up offering cash for around the asking price and won the deal based on a flexible closing timeline.  The 20+ year owner needed time to get all of his stuff/clutter out plus find a new place.
I didn’t think we’d be selling off most of our taxable portfolio to buy a property, but the place would also work well as a rental if we ever got the itch to move again.   After the experience of briefly *not* having a place to live, I can’t see us selling this place in the next thirty years.

What were the financial considerations?

This wouldn’t be a finance blog without going through the numbers behind the decision.   These are estimated since our total costs aren’t finalized yet, we’re still working through a few things that are on our list of improvements:

Purchase Price + Improvements:   $440,000. We estimate once were done with the small things that need work, that’s the total cost we’ll have in the property.

Insurance:  $4,000/yr.   Property insurance is expensive in Florida due to storm risks, but the costs are currently in flux as the state modernizes some rules around assignment of benefits and plaintiff attorney fees that have wrecked the state’s insurance market.   They also allow the mutual insurance companies (ie State Farm) to redline certain zip codes and still write in other parts of the state, driving my costs up on the beach island.  Hopefully this number comes down closer to the national average over time.

Maintenance:  $4,000/year.   I expect normal maintenance and capital expenditures to run around this amount.  The biggest expense in Florida and specifically on the beach islands is the outdoor A/C units.   They run for the most part of 12 months out the year and the salty air attacks its components.

What would it cost to rent something comparable?

We found the rental market here to be similar to Charleston with rates between $2,900 to $3,500/mo.   I’d put this property in the middle of that range, it would get less as a 2bd vs 3bd but garner a premium for being renovated plus having a two car garage and an A+ location.   The reality is we just couldn’t find something comparable to rent if we wanted (and we looked hard), but I’ll put this value at $3,250/mo, or $39,000/year.

We essentially converted $440,000 in stocks and bonds into personal real estate for an implied return of 5.91%.   This is a relatively low risk return since it replaces cash outflow in rent and this return isn’t subject to taxes like capital gains, dividends, or interest would be.

What about the housing market?

Are you worried about the housing market?   Meh

Do I think the housing market has issues?   Yes.

Will it bother me?  I’ll get over it.

I think the nation’s housing market has issues.   One group of people shouts “shortages!” while another group shouts “bubble!”.  My opinion is that the answer is somewhere in between.

I find it hard to believe there was suddenly a housing shortage that started in August 2020 and continued until March of 2022.  The housing market was slow in 2019, even in desirable areas.  I sold a house and was looking for another one in two of the most economically vibrant areas of the country and things were slow, even with record low unemployment.

Things did change in 2020, including: 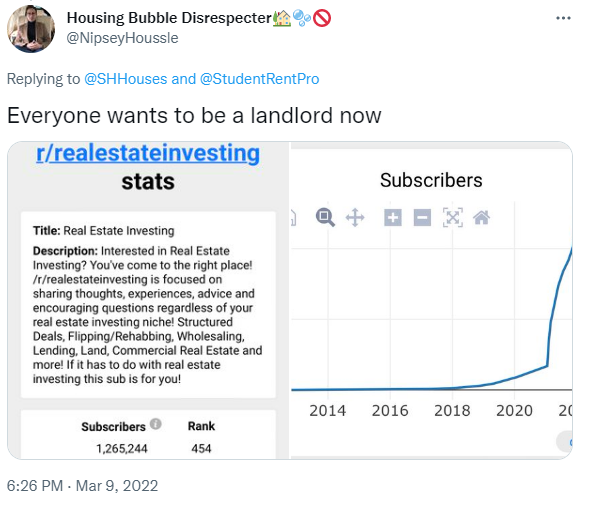 What will happen?   Generally I just don’t care.  The house we bought could fall 30% in value and the  dent in our net worth would be minor.  We bought the house because we needed a place to live, liked it, and we could afford it.

Now had I seen this coming or accurately predicted the market? I would have held on to house #3 and #4 as a rental unit then sold them both in early 2022 and enjoyed an extra half a million in our net worth.   But if I could also go back and play the time machine game, I’d probably be making leveraged bets in both directions on Tesla stock instead of real estate….

If I were forced to make a prediction on the housing market, I’d expect us to see an early 1990s style housing correction.   During that time, the country saw the following:

It’s feasible that the correction back to trendline looks like a 5-15% drop from March of 2022 prices followed by five years of flat prices while inflation catches up.

The real risk in this cycle will be with multifamily and rental property investors, specifically in markets with significant additional supply.  The country is building a record number of apartment units, concentrated in the sunbelt markets, against the backdrop of a shrinking 16-25 yr old demographic.  There’s a handful of major markets that are going to add 10-12% to their total apartment supply in the next year.  That will impact both vacancy and rental rates while helping affordability.

Single family housing, and specifically owner occupied single family housing, will likely not be hurt as bad. The majority of homes in this country are either owned outright (40%) or have sub 4% financing in place.   I’d expect most people to stay put due to an existing low interest rate, creating a slog of a market between limited sellers anchored on 2022 prices with limited buyers able to afford 2022 prices at market interest rates.   This scenario is mostly bad only for those who earn a living off real estate transactions, especially if rental rates ease due to overbuilding.  There one exception to this will be single family housing in markets with a higher percentage of 2nd homes / AirBNB. Vacation areas typically do worse in a recession and the hospitality business is hurt from the simultaneous decline in both rates and occupancy.

I’ve been on both sides of the rent vs buy argument as a financial decision, but ultimately settled on purchasing this place as a lifestyle, control, and risk management decision.   I’m past the point in my life where I want a landlord’s problem to become my problem) and we now own a beach property that (provided mother nature cooperates) we’ll always control.  It has the added benefit that ownership is a hedge against inflation. If rental costs were to go parabolic again, we aren’t forced to absorb those costs. The implied return is 5% with some inflation protection when we only need a 4% return after inflation as an early retiree, so we also viewed this as a a risk management decision.